Species of Harpactorinae are characterized by:

Species of the genus Apiomerus Hahn, 1831 (Harpactorinae: Apiomerini), the charismatic bee assassins or bee killers, are among the most commonly encountered and easily collected Reduviidae in the New World. With 105 currently described species and a rough estimate of 210 species, the genus is one of the largest assassin bug genera. The tribe Apiomerini is restricted to the Nearctic and Neotropical regions, with species of the genus Apiomerus occurring from Argentina to the Northern US. Bee assassins are mostly active during the day and are commonly seen on flowering vegetation. Apart from general interest in their remarkable natural history and despite their disreputable common name, species of Apiomerus may be important as natural enemies for crop pests.

The bee killers are characterized by remarkable prey capture behaviors and a peculiar type of maternal care. Species in the harpactorine tribes Apiomerini, Ectinoderini, and Diaspidini apply plant resins to their legs and use this “sticky trap” to catch prey insects (Roepke 1932, Miller 1956, Usinger 1958, Adis 1984, Bérenger & Pluot-Sigwalt 1997). Several species of these “resin bugs” target stingless bees at their nests (Johnson 1983, Adis 1984, da Silva & Gil-Santana 2004) and this association may date 35-40 million years to the origins of Dominican amber in the Oligocene and Eocene (Maldonado et al. 1993). 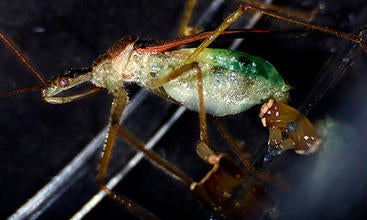 Females of Apiomerus also collect sticky plant secretions and store them on the ventral surface of the abdomen in a dense, sexually dimorphic fur of setae, scrape them off during ovipostion, and cover their egg masses with the secretion providing protection from egg predators (Eisner 1988, Choe & Rust 2007). In addition, the female possesses unique glands on the ventral surface of the abdomen (Barth 1963, Choe & Weirauch, unpub. obs.). We are currently investigating the roles of plant-derived versus endogenous secretions in an effort to determine if the endogenous secretions prevent the resin from polymerizing (Choe, Millar, Weirauch & Rust, in prep.). The secretions protect the eggs, but are also used by the early instar nymphs as a sticky trap to catch their first meal (Eisner 1988, Weirauch, unpub. obs.). The ontogeny of sticky trap predation throughout the immature stages also seems remarkable: Wygodzinsky (1948) observed that older immatures of Heniartes (Apiomerini) produced their own sticky secretions, but that first instars depended on exogenous resources. This pattern is repeated in species of the genus Zelus in the tribe Harpactorini, where first instars rely on female-derived sticky resources, but later instars increasingly produce their own secretions (Barth 1952, Wolf & Reid 2001, Weirauch 2006, Weirauch, in prep.) from specialized sticky glands. The ontogeny remains unknown in the majority of resin bugs.

Biological data of selected species together with a sound phylogeny of the tribe Apiomerini will provide insights into the evolution of this intriguing system of specialized prey capture methods and parental care.

Check out the systematics of the genus Apiomerus here!

Check out the revision of the genus Zelus here!

Check out the Harpactorini phylogeny here!